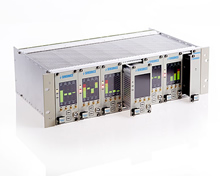 CONTINUED SUCCESS FOR SENSONICS IN THE FAR EAST

Condition monitoring specialists SENSONICS are enjoying continued success in the Far East with new contracts for their innovative Sentry G3, high performance sensor conditioning and monitoring system. In addition to a number of successful installations at power plants in China is another project in Vietnam at the PhaLai Thermal Power Plant.

The ‘retrofit’ project was fairly complex and included a number of variants which the Sentry G3 system was required to monitor. For example, Shaft position measuring and monitoring, relative to the position between the turbine shaft with the bearings. The system also automatically protects the turbine when the relative position is over the pre-set level. Specifically, the turbine will be stopped when the shaft move to the generator side 1.2mm or when the shaft move to the turbine side 1.7mm (-1.7mm to + 1,2mm). Other variants include; high and low pressure cylinder expansion, with both requiring an alarm signal.

Also, turbine block expansion to measure the expansion of the turbine block relative to the floor, specifically temperature from 55 to 65°C, pressure from 15 to 20 kg sq/cm, vibration from 18 to 20 um and also oil vapour detection. For shaft vibration and eccentricity, the sensor was required to monitor speeds from 3 to 300rpm when the turbine was started, with a unit of measuring um (10-6 m). Finally, a speed sensor covering the range of 0-4000 rpm (turbine rated speed of 3000rpm) was required with 2 alarms for over-speed of 10% and 16% in comparison with the rated speed. Following the installation of the Sensonics system on the older Russian built turbine, engineers at the PhaLai plant have been very satisfied with the performance and as a result have asked Sensonics to quote on additional monitoring systems for their Japanese manufactured turbine.

The completion of the installation at the PhaLai Thermal Power Plant in Vietnam project is another example of continued success for Sensonics in the Far East and underlines their commitment to developing the most effective solutions for vibration, position and speed monitoring for critical machine condition monitoring applications around the world. ENDS.